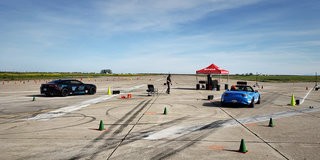 Spring has sprung and the 2019 Tire Rack SCCA® ProSolo® season kicked off in Crows Landing, CA this weekend. The first of three consecutive weekends of ProSolo competition didn’t disappoint as we saw the first glimpse of car changes and new drivers to the series.

Super Street may have only had five competitors, but the whole class was covered in a 1.5-second blanket. Ken Motonishi took the win in the Porsche GT3 with Doug Rowse 0.644 second back in second in his Chevrolet Corvette. Erik Strelnieks was just 0.016 second out of a trophy in his new Acura NSX.

With new cars being the topic of the weekend, Jeff and Nicole Wong debuted their ESP Chevrolet Camaro SS in Street 3 and Ladies 1. Jeff took the win in Street 3 with a 3.157-second margin of victory over Steve O’Blenes in his DSP Mazda RX-8. In L1, Nicole claimed victory by 2.106 seconds. Tara Shapowal, in a Porsche GT3 RS, and Lisa Berry, in a Mitsubishi Evo IX, claimed the second and third place trophies respectively. Jeff also took Top Index honors and when it came time for challenges, they claimed Super and Ladies Challenge wins. Terence Chang claimed the Bonus Challenge win in his STX Subaru BRZ.

In the 10-driver Ladies 2 class, we saw a lot of movement as Shelly Monfort readjusted to street tires and her C6 Corvette Z06, as opposed to the C7 on Hoosiers she’d wheeled the previous weekend at the Charlotte Championship Tour. Annie Gill was also adjusting, but to the launch restrictions of her new Honda Civic Type R. Shelly led the way and never looked back, but after Saturday afternoon, event chair Youmna Zalzal was in second place with Gill just 0.058 second back and Lacey Otis only another 0.036 second behind in the Ford Focus RS. The top three all found time on Sunday morning. Gill was able to overtake Zalzal, but Monfort held onto a 1.070 second of her lead to take the win. Otis held onto the fourth and final trophy position.

Competition isn’t always what makes events great. While Dennis Hubbard took the E Street victory by 0.365 second over Edward Tsui, Peter Loney took out some cones on course, resulting in one wedged into the gap between the passenger door and quarter panel, giving the illusion of a cone glued, upright, to the side of the car. Matt Waldbaum and Alex King took the third and fourth place trophies respectively in the 11-driver class.

When a family races together, it’s fun to watch them evolve through their careers. The Kiesel Family is known for their iconic neon green Bugeye Sprite, but only recently have the kids, Zak and Kaila, started racing this car. In her first ProSolo in the car, or any car with a manual transmission, Kaila finished fifth in Race Tire Index 1, just 0.543 second out of a trophy. Father, Jeff won the class by a commanding 6.790-second margin with Paul Durr and Jesus Villarreal in the second and third place trophy positions.

Further proof that competition isn’t all that matters, Matt Jones' A Street Chevrolet Corvette died on course with an electrical problem Sunday morning. Not only did Shelly Monfort offer her Corvette for the remainder of his runs, but she and Ken Mollenauer MacGyvered a fix with the aluminum foil from Ken’s taco lunch and zip ties, allowing Jones to get home to San Diego safely.

Complete results from Crows Landing can be found here.

The Tire Rack SCCA ProSolo season continues this weekend in Fontana, CA. Learn more about this event and the entire schedule here.