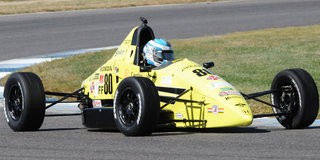 LAS VEGAS, Nev. (Jan. 21, 2018) -- First presented in 1954 by then President Dwight D. Eisenhower, the President’s Cup is awarded to the SCCA® driver demonstrating ability, competitiveness and success at the SCCA National Championship Runoffs®. The winner is selected by the Stewards of the Meeting and the Chief Steward of the National Championship Runoffs. The 2017 recipient is Formula F driver Matthew Cowley, of the Central Florida Region.

Previously awarded to drivers such as Roger Penske, Skip Barber, Bobby Rahal, Jim Hall and Paul Newman, Cowley adds his name to the list due to his exciting performance at Indianapolis Motor Speedway during the 2017 SCCA National Championship Runoffs.  There, Cowley started third, but the driver out of Tampa, Florida, outlasted a gaggle of other young competitors for a Formula F National Championship.

Only 19 years old at the time, Cowley in the No. 80 Team Pelfrey/Gap Guard Mygale FF/Honda crossed the stripe just 0.659-second in front of the second-place driver, averaging 79.905 mph over the 19-lap race.  It was Cowley’s first-ever Runoffs appearance.

The draft was a key component of the race, where the trailing two drivers behind the leader got a pull down the front straight, across the Yard of Bricks, and into Turn One, where lap after lap the young combatants fanned out and swapped positions. Each of the top-three competitors spent time at the front. An exciting last couple laps left Cowley in the lead through Turn One on the final lap. He held off other race-long challengers and took the checkered flag.

“It’s an unbelievable feeling to be crowned a champion,” Cowley said after his Runoffs victory. “It just feels amazing. There’s not really a typical lap, it’s just pack racing and anything can happen at any time.”

After receiving the President’s Cup trophy during the SCCA Hall of Fame and Awards banquet that closed the 2018 SCCA National Convention in Las Vegas, Cowley said, “I’m really honored and humbled to receive such a prestigious award. Thank you to the SCCA for giving people like me a road to follow their dreams."

Winning the President’s Cup puts Cowley in an elite class. Every name on the President’s Cup tells a story of tremendous achievement, and his is certainly worthy of inclusion. The entire SCCA community congratulates Cowley on his accomplishments. His name now resides in the company of legends.

The Sports Car Club of America®, Inc., founded in 1944, is a 67,500-member motorsports organization that incorporates all facets of autocross, rally and road racing at both Club and professional levels. With headquarters in Topeka, Kansas, the SCCA annually sanctions over 2,000 events through its 116 Regions and subsidiary divisions. Much of the SCCA’s activities are made possible with support from the following Official Partners: Chevrolet, the Official Truck of the SCCA; Hawk Performance, the Official Brake Products of SCCA; Mobil 1, the Official Oil of SCCA; Sunoco, the Official Fuel of SCCA; and Tire Rack, the Official Tire Retailer of SCCA. To learn more, please visit www.scca.com.